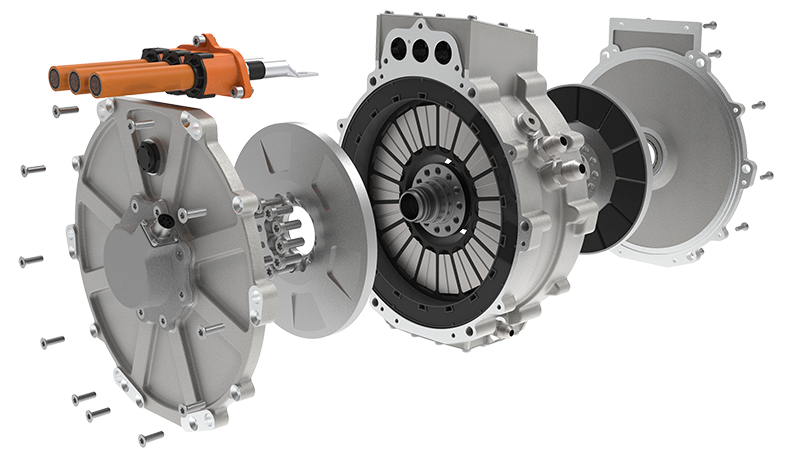 Axial flux technology was already researched and patented by Nikola Tesla back in 1889, and the advantages of the technology compared to conventional radial flux PM motors are extensive. From an electromagnetic perspective, as already known for a long time in the academic world, the axial flux machine topology is more effective. Over 100 years later, 99% of electric cars still use a radial flux motor. Did we simply forget about axial flux motors in the meantime?

Not really. Radial flux motors once had the upper hand on axial flux machines. This is because they were quite straightforward to design and build with the knowledge and tools available at the time, and they performed well.

It is only recently, under the impulse of electric mobility and the quest for ever-higher performance and efficiency, that the technology has regained the interest of research institutes and technology startups.

Axial flux as the turbocharged cousin of radial flux

If we make an analogy to internal combustion engines, where radial flux motors represent the “classic” atmospheric engines (i.e. without turbo), axial flux motors would be their modern turbocharged cousins. Turbocharged engines are more complex than atmospheric ones, they are more difficult to design, and they require modern production equipment and strict manufacturing tolerances. However, this is all outweighed by the fact that they have much higher efficiency and that they’re also a lot lighter.

Just like with turbocharged combustion engines, the challenges of building axial flux motors range from the design phase to large-scale manufacturing.

Let’s start with the required design software. The electromagnetic design of radial flux machines is typically done with 2D calculations, while the magnetic flux of axial flux machines flows in three dimensions and requires 3D simulation software. This only became available recently and requires powerful hardware. If you want to learn more about the electromagnetic differences between both motor topologies, I invite you to read this blog article.

Mechanically, there’s also a challenge because in a single stator – dual rotor topology (which is the topology for a yokeless axial flux machine, more on that later), we have two air gaps: one between the first rotor disk and the stator, and another between the second rotor disk and the stator. A uniform air gap between the rotor and stator is essential to optimize for NVH. Since radial flux motors only have one air gap, this uniformity is easier to control in a radial flux motor topology.

A second mechanical challenge is related to the fact that our axial flux motors are of the so-called yokeless type. This means that they don’t have a stator yoke, which is the part that normally holds the stator teeth together to form a monolithic stator. The absence of a stator yoke means that we can put the stator in the middle and use both sides of the stator to generate torque with a rotor disk. It also means that the losses, which are normally associated with the yoke, have disappeared. However, you now need to have an alternative way to connect the stator teeth. Traxial has patented an innovative way to connect the teeth, which are called cores, to form the stator.

The windings of these cores are located deep within the stator and between the two rotor disks. This brings us to the thermal challenge: how to cool the motor? In the case of a radial flux motor, the stator is typical indirectly cooled from the outside, via a water jacket in the housing. More recent radial flux motors are cooled via so-called direct oil cooling. Direct oil cooling is more effective than indirect cooling since it removes the heat directly from where it is generated. Similarly, our direct oil-cooling system removes the heat directly from the windings, but our patented system does this in a much more effective way, resulting in the lowest possible stator temperatures. These lower temperatures increase the motor’s efficiency and also allow for much higher continuous power compared to other cooling methods.

The yokeless stator has always been known to be a challenge in terms of manufacturability. Most motor companies producing this type of motor are limited to prototyping and artisanal manufacturing, which makes them quite expensive. The road to automated production and achieving mass manufacturing has proved extremely difficult.

Companies have worked on several solutions to overcome this problem. One of them is removing not only the stator yoke but the whole stator iron altogether. However, these so-called coreless machines require a significantly larger diameter and a much more permanent magnet material. Due to the low power and torque density, as well as relatively high magnet cost, this only remains a viable solution for very specific low-power applications, like disk drive motors or capstan motors for tape recorders.

At Traxial, we’ve invested several years in rethinking the design-for-manufacturing for yokeless axial flux machines. The concept of our motor was conceived starting from a blank sheet of paper, instead of basing our design and principles on a radial flux machine. The resulting motor design enables full scalability of production and associated cost reductions, which enhances the probability of you soon driving a car using our axial flux technology.

In the future, we can expect axial flux motors, and particularly the yokeless variant, to claim an ever-larger portion of the growing market of electric (traction) motors. Companies such as Traxial are working relentlessly to demonstrate the technological superiority of this technology and to prepare it for mass production. Thanks to the undeniable advantages of yokeless axial flux technology, its business case is stronger than that of its more traditional radial flux cousins.

Note: Traxial is an official subsidiary of Magnax. Traxial’s mission is to accelerate the innovation of powertrains by developing yokeless axial flux motor and inverter solutions that excel in power density, efficiency, and reliability.

Double-rotor or Double-stator: a Matter of Efficiency

If you’re familiar with electric motors, you’ve probably noticed that not all axial flux motors are…

In recent years, we’ve seen some vehicle developers moving towards powertrain configurations where the motor…